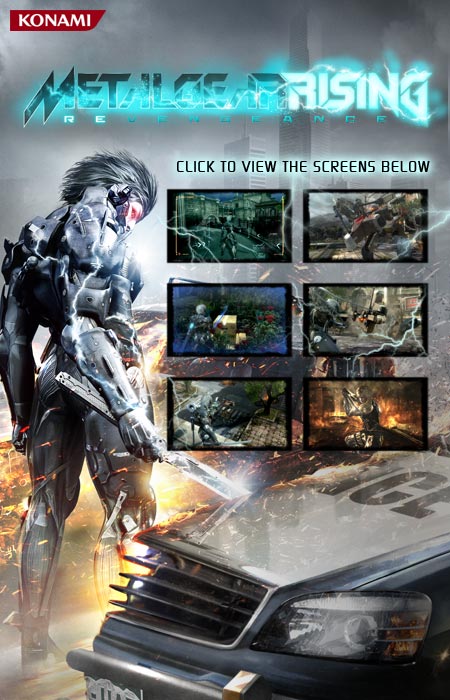 METAL GEAR RISING: REVENGEANCE takes the renowned METAL GEAR franchise into exciting new territory by focusing on delivering an all-new action experience unlike anything that has come before. Combining world-class development teams at Kojima Productions and PlatinumGames, METAL GEAR RISING: REVENGEANCE brings two of the world’s most respected teams together with a common goal of providing players with a fresh synergetic experience that combines the best elements of pure action and epic storytelling, all within the expansive MG universe. The game introduces Raiden as the central character; a child soldier transformed into a half-man, half-machine cyborg ninja, equipped with a high-frequency katana blade and a soul fueled by revenge.

In the near future, cyborg technology has become commonplace throughout society. Three years have passed since the collapse of the Patriots system that had been secretly controlling the global power balance from the shadows. However, peace remains elusive. The dissemination of cybernetic technology has triggered instability and conflict as those who control the trade gain increasing power. Furthermore, large ‘Private Military Companies’, or PMC’s, that had been supported and controlled by the Patriots have collapsed, spawning countless rogue entities with origins to larger criminal organizations. These renegade PMCs employing cyborg technology have become increasingly more disruptive shifting policy and power at will. As a member of the peace-keeping PMC ‘Maverick Security’, Raiden lives by the mantra of protecting and saving lives. But as the world plunges further into asymmetric warfare, the only path that leads him forward is rooted in resolving his past, and carving through anything that stands in his way.

The latest METAL GEAR console experience featuring an all-new style of frenetic action gameplay and central character, Raiden, a cyborg ninja who uses his High Frequency katana blade to cut through any thing that stands in his vengeful path! New game design, the birth of a new type of MG experience: Combining development powerhouses Kojima Productions and PlatinumGames together, METAL GEAR RISING: REVENGEANCE will offer a fast & fluid game style centered on katana-based combat within the METAL GEAR universe. Advanced technology: Produced by a hybrid team of renowned developers, the in-game technology promises to push the boundaries of graphics, style and lightning-speed action gameplay. ‘ZanDatsu’ cut mechanic: Within the game world, players will be able to take advantage of what has been created- “an all-encompassing cutting plane in real time”. Cut anything, anytime, anywhere. Epic story in the vein of what MG is known and loved for: The game takes place after the events of METAL GEAR SOLID 4 where the world has fallen into chaos with cyborg crimes & terrorism running rampant in society. Delves into the continuing story of Raiden, a child-soldier turned cyborg ninja who’s origins are connected to both METAL GEAR SOLID 2 and METAL GEAR SOLID 4.

Action Games are Back with a Revengeance This game far exceeded my expectations. It is truly the best action game so far this year, and one of the best actions games of this gen. If you’re hankering for some action, or you’re just a long time Metal Gear fan, check this title out.It’s certainly a Metal Gear game, though not a Metal Gear Solid game. If you want a focus on sneaking, Ground Zero was already announced a while ago. This game is all about fast, frenetic action… it is a veritable rollercoaster ride of ridiculous…

Drenched in style and saturated with speed, this is a Metal Gear like none other Being a long time MGS fan, my hopes were not particularly high with this game. The absurd title, the ludicrous box art (which looks like something from the 90s), the temporary cancellation of the project, and the departure from the MGS tradition, all led me to believe that this was a disaster in the making (despite Platinum’s fine track record). Fortunately, I’ve been pleasantly surprised by the quality of this game… “Rising” is a blast to play for anybody who enjoys action games (whether…